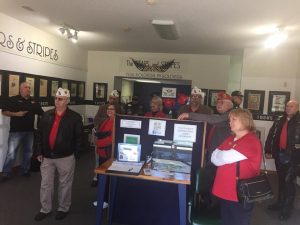 The National Stars and Stripes Museum/Library is a non-profit educational institution dedicated to collecting, documenting, and preserving materials related to the creation and continued history of the Stars and Stripes military newspaper.

By preserving and interpreting the Stars and Stripes and making its archives available, the museum and library seek to enhance the public’s understanding and appreciation of the newspaper’s role in American and world history.

There was little peace in the small town of Bloomfield, Missouri between November 7, 1861, when Brigadier General Ulysses Grant ordered federal soldiers to destroy the pro-southern Missouri State Guard troops of Brig. Gen. M. Jeff Thompson, and September 1864 when bushwhackers left the town in ashes. During this time, control of the town changed over twenty times, Union troops shelled the town and printed the first issue of the military newspaper, The Stars and Stripes. Their officers staged a mutiny, several executions took place, and 6000 cavalrymen camped here at the Union prepared to join the campaign to capture Little Rock, Arkansas.

Markers that tell the town’s Civil War story have been placed at or near the sites where the events happened.

Stop by the museum and pick up a brochure of the Driving Tour of the Stars and Stripes Historic-Cultural Byway.