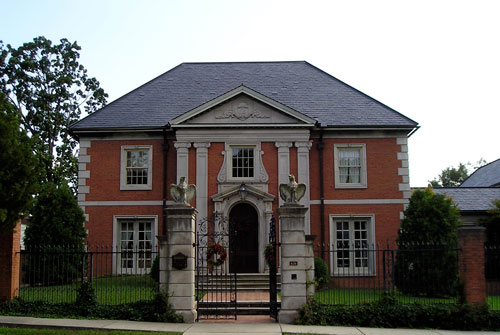 Along with exporting the Reading Program, The Claudia Foundation will concentrate on bringing to the Claudia House, culturally significant events, exhibits and entertainers to share with the community. We will also participate on mechanically maintaining (no small issue) this historically important building.

An English Company — Artisans of Crowther of Syon Lodge (the same company that re-built the war ravaged Windsor Castle in the 1660’s) constructed the giant library in London, disassembled it, and sent it by ship to New Orleans. It was then sent by barge up the Mississippi river to Cape Girardeau, Mo. and trucked the last 60 miles to Poplar Bluff.

The builders came from London and spent over six months in Poplar Bluff reassembling the library. One of the workers remarked it was, “the best adventure of his life!” They loved Poplar Bluff and several have been back for visits over the years.

The formal gardens surrounding the house are enhanced with European statuary. It is truly a place of beauty and historical significance.

Linda Bloodworth-Thomason, founder of the Claudia Foundation, is the renowned creator and executive producer of many popular television series. She graduated from the University of Missouri at Columbia with a B.A. in English Literature. Linda’s television writing career was quickly launched after she wrote an episode for the television series M*A*S*H for which she received an Emmy nomination.

In 1983, she and her husband, Harry Thomason, founded Mozark Productions. Bloodworth-Thomason received Emmy nominations for the television series Designing Women, which she created and produced. Her other series include Evening Shade, Hearts Afire, Women of the House and Emeril.

She is currently fulfilling her dream of helping young people and all people in her home town. She created the highly lauded television series Designing Women, Evening Shade and Hearts Afire, and has written over four-hundred-and-fifty scripts for television and received numerous Emmy and Golden Globe nominations.

She is also the director, producer and writer of the 1992 landmark political documentary The Man from Hope, the 1996 Democratic convention film for President Clinton, A Place Called America, the 2000 Democratic Convention film for President Clinton, Legacy, the introductory film for the Clinton Presidential Library, the Senator Hillary Clinton campaign film, Hillary 2000 and the 2008 Hillary Clinton Democratic Convention film. Bloodworth Thomason and her husband, television and film director Harry Thomason, served as the co-chairs of the 1992 Presidential Inaugural.

Bloodworth Thomason has received the Eleanor Roosevelt Freedom of Speech Award from Americans for Democratic Action, the Lucy Award from Women in Film, the GLAAD Media Award, the Women’s Legal Defense Fund Annual Award as well as the Silver Satellite Award, the highest honor bestowed by Women in Radio and Television.

In 2013, the marriage equality documentary, Bridegroom, which Bloodworth Thomason wrote and directed, won the audience prize at the Tribeca Film Festival as well as the Los Angeles Outfest Film Festival. Also, actress, Lupita Nyong’o recently presented Bloodworth Thomason with the GLAAD Award for Best Documentary film and comedian Lily Tomlin presented her with the Lifetime Achievement Award on behalf of GLSEN.

Bloodworth Thomason is currently working on the musical The First Wives Club that will open in Lancaster, PA in the spring and start it’s tour to Broadway.