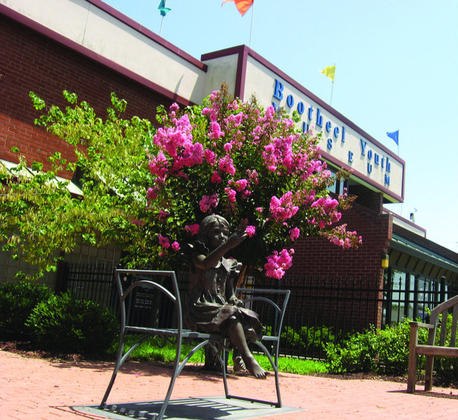 Incorporated in April 1990, the Bootheel Youth Museum was established in Malden, Missouri by a group of dedicated civic leaders, schoolteachers, administrators, and interested citizens in the Southeast Missouri area. The mission and purpose of the museum was developed and adopted by the board of directors on Feb. 24, 1992 and opened its’ doors to the public on March 9, 1996

What began as a conversation between three local women, soon evolved to include more than 250 volunteers, over 25 major businesses who continue to enable the museum to meet its goal and mission. Under the guidance of the executive director the museum has grown from its original 10,000 square feet of exhibit hall to 25,000 square feet which includes the BYM Children Village, This Island Mars: A Space Adventure, Missouri Nature, Shadow Room, Bubble Room, Making Tracks on the Lewis and Clark Trail and Nano (opened in 2014). Nearly 50,000 children have enjoyed a variety of educational enriching programs in our 180-seat children’s theater. The Bootheel Youth Museum has had over 462,000 visitors in its nine-year history, with an additional 75,000 being reached through outreach programs.